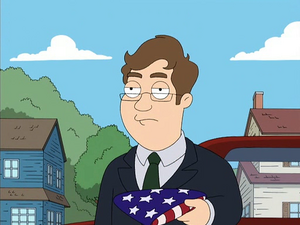 Chris Diamantopoulos (born May 9, 1975) is a Greek Canadian actor. Diamantopoulos portrayed Robin Williams in a television movie about the behind-the-scenes drama during the making of Mork and Mindy. He has guest-starred in several series, including Kevin Hill, Charmed, Nip/Tuck, and Boston Legal, and had a supporting role The Starter Wife. He has a recurring role on the Lifetime drama series State of Mind.

Retrieved from "https://americandad.fandom.com/wiki/Chris_Diamantopoulos?oldid=58628"
Community content is available under CC-BY-SA unless otherwise noted.