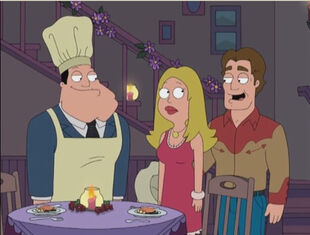 Choosy Wives Choose Smith
Francine is still engaged to a man she thinks is dead, but who Stan finds out is not. 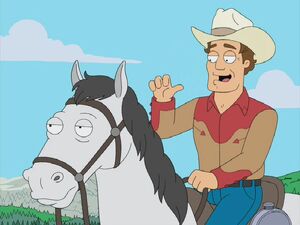 After Stan boasts that he has obtained his pilot's license, Francine begs him not to fly small aircraft. She reveals that she was engaged to another man named Travis who disappeared in a small aircraft before she met Stan. After he reappeared, Francine was already engaged to Stan. Realizing that his wife may have only settled, Stan tracks down Travis and finds he is a wealthy, successful cowboy. He sets up a dinner between Francine and Travis, but Francine repeatedly states she loves Stan and did not settle. Though Stan is satisfied, Roger says that he must be sure, so they fake crashing into the ocean, when they were actually hiding at a remote CIA island. His plan is to disappear for two months and see if Francine remains loyal until he returns, having installed cameras throughout the house to make sure. However, a tsunami hits the island on their second day, destroying everything and reducing it to a tiny desert with only a palm tree. After nearly three months, Stan discovers that Roger floats effortlessly in water and they are rescued by a passing cruiser. When they return, Francine seems to have moved on, with Travis living with her but then reveals that she easily discovered the cameras and hoped to make him jealous. However, she is immediately taken aback when Stan reveals a tsunami destroyed all his equipment and he became stranded for real. He is convinced, though, that she did not settle for him. Travis is horrified, as Francine didn't sleep with him and leaves, saying they are meant for each other. 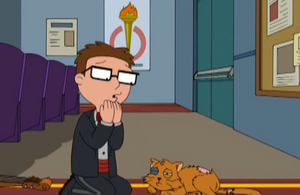 Meanwhile, Steve takes up the cello to impress Lindsay Coolidge. On the way to practice, he finds an adorable cat on the opposite side of the street. While crossing the road, the cat is hit by a car. When a horrified Steve runs to the animal's side, he is clawed severely about the face. Steve's pal Snot says the cat was just frightened, and even manages to pet the cat without being attacked. When Steve attempts to make amends, however, the cat, whom Steve has named Simon, continues to scratch his face in an increasingly brutal running gag. Steve abandons the cat in a huff. However, he has a dream in which he and Simon are playing complacently together but are then separated, which he takes as a sign.

After his recital, he spots a limping Simon at the auditorium door and presumes that the cat wanted to be with him as he seemingly dies, but he then realizes that he is sleeping, and the cat begins tearing at him. He beats it up several times. The cat is psychotic and brutal, and keeps coming back for more, including posing as Roger's new toupee just to get a last crack at Steve.