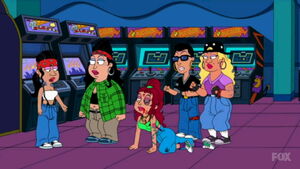 The Chicas Freakas is an all-girl street gang. After beating up a new initiate in the arcade in "School Lies", they become impressed with Steve's skill with a gun on an arcade game. After feeling his privates, they decide he is more girl than boy and invite him to join their gang, beating him up and having fake eyebrows tattooed on his forehead.

While Stan is at dinner with a Senator, about to ask for a premium task force position, Francine calls hysterical that Steve was involved in an armed robbery and arrested. Forced to choose between advancing his career or helping Steve, Stan observes the Senator working on his Blackberry while ignoring his daughter who remained face-down in her food after a drug binge, desperately trying to reach out for her father only for him to move farther away. Stan elects to use his favor to bail Steve out of trouble.

Retrieved from "https://americandad.fandom.com/wiki/Chicas_Freakas?oldid=74299"
Community content is available under CC-BY-SA unless otherwise noted.