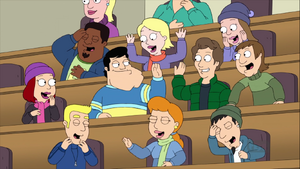 Chicago Dave is an old college friend of Stan's who went on to have a successful career in writing comedy for Sketches 'N Laughter, also known as SNL, in "Stan Moves to Chicago".

When he offers Stan a chance to come with him to Chicago after college, the ladder is afraid to go. Needing companionship, Dave grabs a mannequin from a trash pile to take with him, and when Stan later makes his debut on SNL still has it and treats it like his spouse.