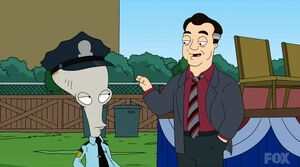 Lt. Chaz Migliaccio was a crooked detective that takes advantage of Roger in "Cops and Roger".

When Roger and Francine are mugged at the Langley Falls Shopping Mall, Roger feels insecure about his manhood and joins the Langley Falls Police Academy. When Roger does poorly at the police academy, Stan gets him back into shape. Roger does so well, he comes under the eye of crooked cop Chaz Migliaccio who soon teaches Roger how to take advantage of his position. Stan quickly observes Roger's actions and confronts him, telling him that Roger is acting dishonorably. Roger responds that he now feels like he has all the power he lacked before and likes it. Stan decides to turn Roger in as a dirty cop but Chaz gets word and orders Roger to take out Stan. He turns to find Stan he responds that he didn't give away the tape of Roger's activities because of Roger's original intention to be a good cop. Later with Chaz, Roger tries to break away but finds Chaz has captured Stan and orders Roger to kill him. Roger tries to turn the tables but Chaz was ready for him and shoots Roger. Roger leads him on a chase. Chaz's life is brutally ended when Roger uses his elbow to smash and obliterate his head. His headless corpse kneels, then falls, the open top bleeding heavily. He was later seen under a white sheet.

Chaz was voiced by Bobby Cannavale.

Retrieved from "https://americandad.fandom.com/wiki/Chaz_Migliaccio?oldid=63685"
Community content is available under CC-BY-SA unless otherwise noted.