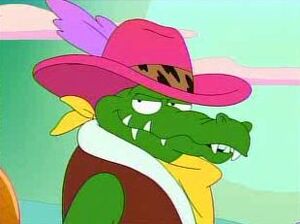 Chocodiles are a confection created by the Hostess company. The package describes the snack cake as a "chocolate coated sponge cake with creamy filling." The Chocodile is Twinkie shaped, but unlike the Twinkie which is sold in packages of 2 or 3 cakes, the Chocodile is sold individually. They can be unofficially called "Chocolate Covered Twinkies".

The Chocodile mascot was Chauncey Chocodile, but Hostess has removed him from packaging and the Web site in recent years. Also, since the late 1990s, Chocodiles are no longer sold on the East Coast of the United States. Hostess has only a few West Coast factories making them and to ensure the products' freshness, Chocodiles are sold only on the West Coast.

Roger raves over the chocodiles Hayley supplies him with while he writes her school papers in "Pilot (American Dad!)", causing him to sugar crash and oversleep, and failing to finish her paper.

Chauncey Chocodile appears in Roger's subconscious in "Brains, Brains and Automobiles". He shoves Stan to provoke him and they fight until Stan cuts him in half with a cocktail olive sword. Earlier in the episode, Roger hides his Chocodiles in the freezer to keep them from being stolen.

Retrieved from "https://americandad.fandom.com/wiki/Chauncey_Chocodile?oldid=53218"
Community content is available under CC-BY-SA unless otherwise noted.