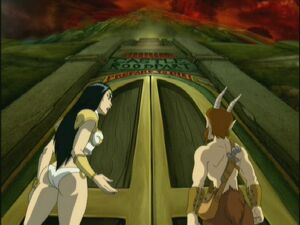 Castle Roodpart is the location of the magical amulet in "Dragon Scuffle" that will return Agathor to life in "Dungeons and Wagons". When Hayley breaks up with Jeff Fischer, he joins Steve's world of online gaming. When Hayley finds out, she tries to talk things out with Jeff, but he ignores her while playing with Steve and the other nerds. Feeling enraged, she tries to sabotage their fun. At Klaus's suggestion, she kills Steve's amazing character by saying his name, Agathor, backwards. However this crushes Steve and destroys his standing among his friends. Realizing how much Agathor meant to Steve, Hayley finds out about an amulet that will resurrect Agathor located at Castle Roodpart, although she discovers slightly too late that the name means 'Trap Door' backwards. They succeed in killing the monster, Jaws-style, that guards the amulet, and they restore Agathor to life by shoving the amulet up his butt. Steve/Agathor then goes to remove the amulet from between his buttocks. Jeff decides that he would like to get back together with Hayley, but she has already found someone else while playing the game and Jeff angrily destroys his laptop in response. Steve is happy to have Agathor alive again and goes to join his friends to extract punishment for his rude treatment, but Barry just says Agathor's name backwards, killing Agathor once again. Steve angrily curses in response.