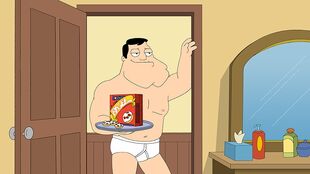 Casino Normale
Francine pretends to be a super villain. 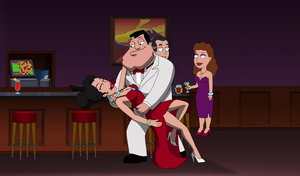 During the annual CIA awards, Francine is turned on during Stan's award-winning seduction of a Korean spy and tries to get him to show that same spark at home, but he prefers to be his normal self. She tries to seduce him at work by leaving a tray of brownies in the kitchen for the other workers, but Stan leaves to eat with the others. While they are out, she steals a thumb drive of CIA secrets. Posing as a villain by the name of 'The Beaver,' she builds a web site with Klaus' help and offers the secrets, drawing in Stan to seduce her. 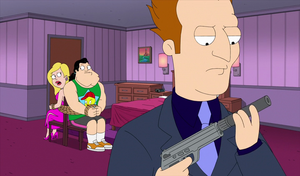 But at the exchange site, Stan immediately recognizes Francine and insists the seduction game is just an act, but when she starts to hand over the drive, 'The Falcon,' another super villain, has stolen it. Realizing that he was monitoring their chat room conversation, she goes back online and posts that she has more secrets to sell. The Falcon responds and offers to meet them in a casino. Francine leads The Falcon to her room, although he insists on the stairs as he doesn't trust the elevator's notice of 'Certificate on File.' In the room, The Falcon holds a gun to her head and insists that her partner toss his gun out of the bathroom, during which Stan asks for some reading materials. They are both tied up and facing death as Francine breaks down realizing that Stan's work isn't a game. Stan takes inspiration of this to use their home life to save them, using Francine's ragged toenail to cut her bonds. When The Falcon realizes they're loose, Francine pops zits on Stan's back, grossing him out. Stan flicks a toothpick he keeps into The Falcon's throat, sending him crashing though the window to his death. The following CIA awards, Stan and Francine win the best couples kill award, but have skipped the ceremony to spend time together at home. 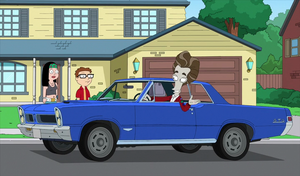 Meanwhile, Roger gets hooked on classic cars, reportedly to get thumbs from mustache guys. Instead, it is part of a trap to capture Jay Leno, whom Roger found in his revenge book, although he can no longer remember the offense. Hayley and Steve find what they think was the reason, but just lead to an acting gig for Roger. Roger eventually realizes that his 'revenge book' is really just an autograph book but by that time, Jay has died. Driving with the body hanging out of the trunk, Roger gets a thumbs-up from an entire row of mustached car guys and realizes it wasn't a complete loss.

Retrieved from "https://americandad.fandom.com/wiki/Casino_Normale?oldid=79100"
Community content is available under CC-BY-SA unless otherwise noted.