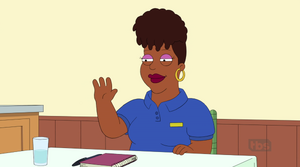 Carol is an observer for the Best Buy best boy award when Steve is a finalist in "Cry Baby".

When pressed by the family, she admits that she believes she he is a shoe-in for the award, especially when he hopes that three-time second place finisher Brent Robert can finally have the victory that he's hoped for. Stan is intrigued by Steve's interest in someone else and has him teach him empathy and how to cry for a CIA mission, but after he succeeds in getting the assignment, he not only has his empathy removed again but removes Steve's as well.

The sudden change in Steve's attitude so turns off Carol and the judges, that they proceeded to give the award to Brent until Jackson, who was hired by Stan, spins a tale of abuse at Brent's hands, but Steve still remains cold. Desperate, Stan shoves a hot torch into Steve's chest to restore him to normal. Steve reveals that he was faking the entire time so that Brent would actually win and it wouldn't seem like he intentionally threw the contest, however, Brent reveals some hidden faults of his own and as a result, the judges change their minds yet again and give the award to Stan.

Carol is voiced by Natasha Rothwell.