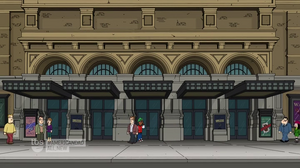 Designed by architect William Burnet Tuthill and built by philanthropist Andrew Carnegie in 1891, it is one of the most famous venues in the United States for classical music and popular music, renowned for its beauty, history and acoustics. Carnegie Hall has its own artistic programming, development, and marketing departments, and presents about 250 performances each season. It is also rented out to performing groups.

Actor Robert Wuhl gives Stan and Hayley tickets to see his show An Evening with Robert Wuhl at Carnegie Hall in "Manhattan Magical Murder Mystery Tour" when they can't decide what to do while in New York for Francine's book award. But when they arrive at the Hall, they find there is no show, but Robert just wants them to hang out for the day with him.

Retrieved from "https://americandad.fandom.com/wiki/Carnegie_Hall?oldid=62172"
Community content is available under CC-BY-SA unless otherwise noted.