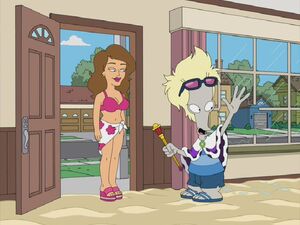 Carmen Selectra is an MTV host that Roger sees crown a previous King of Spring Break and covets the title for himself in "Spring Break-Up". While Francine heads to her parents for a week, Roger turns the house into a party zone.

When Carmen shows up with her less than enthusiastic crew, Steve sets his sights on losing his virginity to her. When she decides to take him up on it, he surprises her by demanding her medical records. She becomes intrigued enough to provide them to Steve but he turns her down again because she had breast implants. Towards the end of the party, Carmen presents to Roger the crown that will make him King of Spring Break, though he turns down the offer as he says that there is something lacking in his party. Carmen then announces to Steve that she had her implants removed so they can have sex by flying her surgeon in on her private jet. Unfortunately, the stage on which she is standing collapses and she is killed, thus costing Steve another chance at losing his virginity. Realizing that this is the element he was missing: a party's not a party until someone dies; Roger pulls a dented crown from the wreckage and proudly proclaims himself King of Spring Break.

Carmen Selectra is a parody of Carmen Electra, who actually guest starred in the pilot of American Dad! as the voice of Lisa Silver. One of the party attendees wonders if people meant to say "Electra" instead of "Selectra." But one person disagrees.

Retrieved from "https://americandad.fandom.com/wiki/Carmen_Selectra?oldid=87212"
Community content is available under CC-BY-SA unless otherwise noted.