Can I Be Frank (With You) 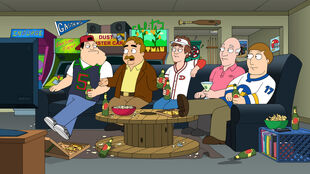 Can I Be Frank (With You)
Francine fears that she and Stan are growing apart. 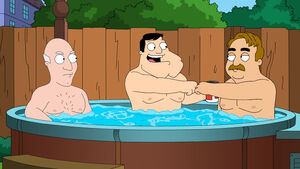 When Francine wants to go out with Stan, he blows her off for his nights at the CIA Chill House with the guys. Francine tries to crash the house by bringing beer but Dick chases her off and shoots her lite beer. Francine goes back to Roger who tells her that men's clubs are shrouded in secrecy but hatches a plan to sneak her in by putting her in a full-body costume as “Frank” from Chicago and she succeeds in gaining entry. Francine makes several faux pas and gets the guys suspicious but Roger has equipped the suit with devices that save her. But Stan still has no interest at home in participating with her and she decides to continue with Frank until she becomes friends with Stan and will then reveal the truth after gaining Stan's confidence. Spending time in a hot tub with Stan, the suit develops malfunctions and makes Bullock suspicious. Bullock calls Chicago and discovers the real Frank is still there. Suspecting that Frank is another spy, Bullock charges Stan to kill Frank while sending them out on an errand.

Francine's continued efforts to make friends with Stan confirm his suspicions and he knocks her out in preparation of killing her. Her efforts to tell Stan are misinterpreted and Stan beats her senseless until he destroys enough of the suit to reveal her. A concerned hiker comes to check on the couple, but Stan says they're fine, threatening to shoot him if he doesn't go away and mind his own business. Jon Hamm appears in a coda warning about the dangers of butting into other people's arguments. 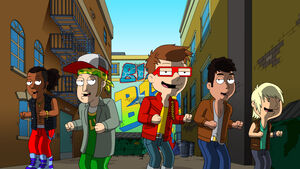 Meanwhile, Steve and the guys perform karaoke at Pizza Overlord and get a contract with Snot's uncle Lew to make a music video. When they arrive they find that he has combined two other boy bands with them to make a superband and make their music video. But they get bad news that the hoped-for contract is lost when their band is trumped by an even larger boy band and Snot's uncle shoots himself.