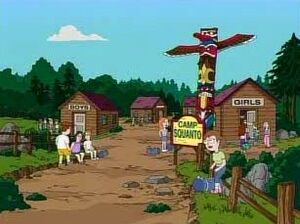 Camp Squanto is where Steve and his friends hope to romance the girls, believing that their geek status is behind in "Brains, Brains and Automobiles". However, the other boys immediately out them as nerds and start bullying them. Steve then realizes that what separates them from the popular boys is their underwear. All the popular boys wear boxer shorts, while Steve and his friends wear white briefs. The boys go to the mall to get some boxers, but instead are convinced by a merchant named Clyde Templeton to buy colorful, bikini-brief underwear. They believe that they are starting a new trend, thus increasing their social status. But instead, the popular boys drag them to the girls' cabins, where they are freaked out. .

Camp Squanto of the Boy Scouts of America

Retrieved from "https://americandad.fandom.com/wiki/Camp_Squanto?oldid=38625"
Community content is available under CC-BY-SA unless otherwise noted.