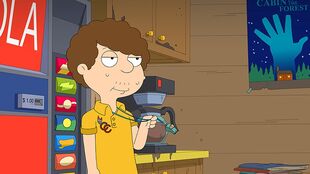 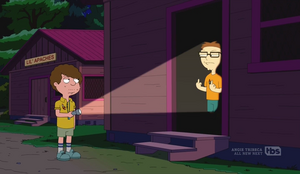 As Steve arrives at his much anticipated summer retreat as a senior camper at Camp Campawanda, he finds that he won't be doing it with Snot, who has accepted a position as counselor-in-training in order to get free tuition to the camp. However, he soon finds that Snot's responsibilities are cramping his fun and starts to feel resentful. When Snot tries to lay down the law with his 'Little Apaches' campers for sneaking in candy, Steve proposes to lead them into a panty raid, but they later decline, recognizing him for a nerd. Steve tries again with a group of younger 'Mini Mohawks,' but is also rejected. When he encounters Snot, he tries again to get him to join him in pranks but is turned down. When he vows to continue his panty raid on his own, Snot is forced to signal for the senior counselors who kick Steve out of the camp. 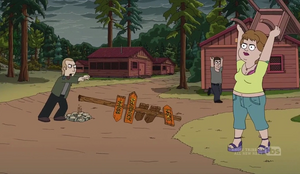 Stopping at a bar outside of the camp to drown his sorrows in Sprite, he finds that the locals hate the camp as much as he now does and plot to get even. After they lock the door to the counselor's cabin, Steve starts to lead the townies on a panty raid, but they reject that to smash the camp instead. When Steve tries to stop them, they turn on him as well. He is saved by Snot and they are both forced to take refuge in the lake. As the locals turn their attention back to the camp, Steve and Snot apologize to each other, but note that they at least brought joy to the locals. 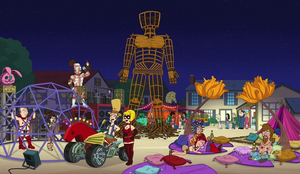 Meanwhile, Hayley looks forward to spending her wedding anniversary with Jeff at Burning Man, but he drops the ball and fails to get tickets. Roger decides to surprise them by building on his own version of Burning Man in the backyard. Stan is critical of the noise and clutter in the backyard, but loosens up when he decides to party with Francine as Klaus gets stoned on Roger's homemade acid. Hayley begins to get suspicious of Roger's motivation and drags Jeff along to get to the bottom of things. When he presents them with a luxury tent in which to enjoy their anniversary, they spy a spot of blood for which Roger lamely excuses. Investigating his attic, they find a phone number for a medical clinic in El Salvador and a bloodied operating table. Fearing that he intends to knock them out and harvest their organs, they plant dummies in the tent, and when Roger slips in with a cooler and a knife, they confront him. He reveals that the cooler contains smoked salmon and vows to never attempt another good deed, revealing that he harvested his own organs to pay for the event, although they were rejected for being alien. As he starts to note that he has survived without needing them, he collapses. Luckily, his organs return to him and enter through his butt, restoring him as he wonders if Jeff took advantage of him.

Retrieved from "https://americandad.fandom.com/wiki/Camp_Campawanda?oldid=79112"
Community content is available under CC-BY-SA unless otherwise noted.