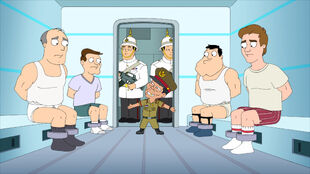 CIAPOW
Stan tries to compete against a CIA drone. 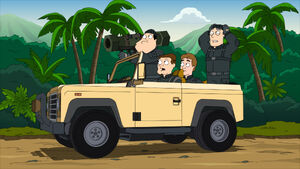 When Stan's mission in Thailand to take out a terrorist weapons cache is interrupted by a CIA drone beating his crew to the target, he discovers that Bullock considers humans too flawed and insists that the machines can do the job without errors as he is in the process of turning himself into a robot. Thinking over drinks, they decide to steal the king's diamond-encrusted inhalator to prove that there are some things that drones can't do. Stealing guards uniforms, they decide to take pictures to prove that it is the real inhaler but due to Dick's incompetence with his camera phone, they are discovered. Escaping from the palace, Jackson's escape route takes them to the red-light district instead. Hooper's idea of a safe house leads them to taking refuge in a Burger King. After a narrow escape, they are captured when trying to return to their hotel.

They are interrogated and try to pass themselves off as filmmakers but their lie flops. In privacy, Stan dresses down his co-workers for their screw-ups until they are led away for torture. They return after being doped with truth serum and admit their faults in the mission as Stan believes that their foul-ups are why Bullock wants to replace them. Stan is taken away for torture and injected with serum to admit his own faults to tell his friends before they are all ripped apart by yaks. Stan tries to fight it but isn't able to and tells his own faults to the guys, being responsible for losing their room information. To escape, they cause a distraction for their guards by beating on Stan, who really intended for them to beat Dick, and fight their way through the prison. Using their individual skills, they manage to work their way out. Home free, Stan decides to try for the inhaler one more time and they are captured again until they are rescued by a cybernetic Bullock. 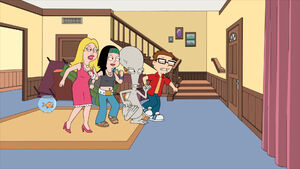 Meanwhile, with Stan out of the house, Steve and Hayley's challenge to do as little as possible turns into a family slow motion race in the house. Klaus drops out early and Roger trips Hayley who takes out Francine. With Steve and Roger the last left, Roger tricks Steve into getting a boner and losing, although Francine points out that they all won by bonding.