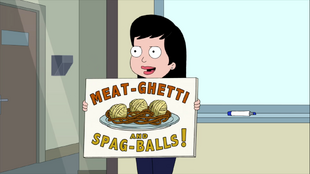 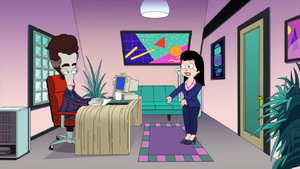 Roger finds Hayley in a fantasy about being a businesswoman. When she decides to pursue her dream, Francine laughs it off. Seeking help from Roger, she gets a tip for a job which happens to have an opening when one of his personas jumps out the window. However, Francine still refuses to take it seriously until she gets insulted, so she gets hired as well, determined to out-business her. When they learn that a pitch could land them an executive job, they become determined to land the job. 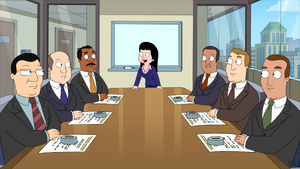 During their presentations, Hayley psyches-out Francine, leaving her to give her presentation on a reversal of spaghetti and meatballs, which gets her the job. When she rubs her success in Francine's face, she sabotages Hayley's project and costs her her executive job. When she realizes what happened, the two begin to fight, and are taken to a company Thunderdome to hash things out. As they prepare to fight, Francine reveals that the reason why she's so critical of Hayley's dream to be a businesswoman is because her own mother shot her down. They settle their differences, but are told they still have to fight, so they try to escape, but are trapped in an elevator. Desperate for something, Hayley vines that Francine's pitch would have been for clothing for teeth. When the company executives break in, they tell them of their idea and are able to not only calm the mob, but make their product a success. 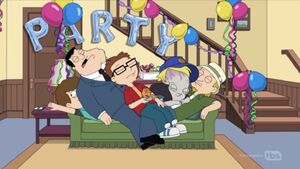 Meanwhile, Stan announces that he just discovered that he's an adult and can have a party on his own, which blows the minds of the guys. But when the party plans stretch out over two weeks, it leaves everyone exhausted and passed out on top of Snot, who can't reach his insulin. They awaken to find that the party happened while they were out cold and missed it, but Stan is still pleased that he threw the bash of the year.