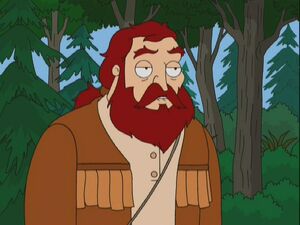 Buckle first appears in "An Apocalypse to Remember" as a mountain man who quit being an Imagineer for Disney and went to live in the forest for ten years for fear of a nuclear apocalypse. Buckle secretly follows the Smiths home in an effort to stalk Hayley and abduct her to marry him. The Smiths come up with a plan to distract him from Hayley and bail Roger out of a jam when he tries to fake a wedding to get a new blender by setting Buckle up with Roger's intended bride, Sharri Rothberg who proceeds to make his life miserable though she does indeed have feelings for him. It is revealed in this episode that Buckle does not actually remember his name, and simply came up with the name Buckle because it "felt right". In the revised opening, you can see Buckle and Sharri walking down the road.

Buckle and Sharri perform a magic act for the CIA torture fundraiser in "Phantom of the Telethon".

Buckle shows up at the Vietnam war reenactment in "In Country...Club" as one of the participants who ends up having his leg blown off and begs Steve to put him out of his misery with a paint ball gun.

Buckle and Sharri are present when Stan and Francine attempt to renew their wedding vows in "Shallow Vows".

Buckle and Sharri host a pool party to celebrate their moving into the neighborhood in "An Incident at Owl Creek".

Buckle puts his Disney training to work to build the best haunted house in the neighborhood in "Best Little Horror House in Langley Falls", forcing Stan to import real serial killers into his haunted house after being upstaged.

In "Hurricane!", Buckle comes to Stan's house to warn him to evacuate. When Stan disregards his warning, Buckle tells Stan that he has an amphibious vehicle which he plans to use when Lower Langley's sea wall breaks. When Buckle and Sharri arrive at the Smith's to escort them to safety, Stan and Francine argue because he believes that Francine has no trust in him. Right when Francine, Steve and Roger were about to leave the house, the water from the broken sea wall hits Buckle and Sharri and they get taken away by the current, and are presumed dead. Later when Stan is making everything worse, Buckle reappears to lend a hand to the Smiths. He is equipped with a tranquilizer gun and shoots a shark, bear, and Stan to ensure the Smiths' safety. He apologizes to Stan for shooting him but explains that, in his defense, he wasn't sure which of the three was doing the worst damage.

Buckle speaks at the town council meeting regarding the sign in front not being changed since Mary Lou Retton won Olympic gold medals in "Roots". He wishes to break the glass to fix the sign, but it turned down with the council noting that someday the key would turn up. He later breaks the glass himself, changing it to read that there is no key for the display. He is also part of Stan's circle of older basketball players in "Criss-Cross Applesauce: The Ballad Of Billy Jesusworth".

Stan finds that Buckle and Dick went to Houston together in "Persona Assistant".

Buckle and Sharri attend Tuttle's eclipse party in "Stan & Francine & Connie & Ted". Buckle is shown in an emergency room after eating under cooked meat-ghetti and spag-balls in "Businessly Brunette".

Buckle is voiced by Matt McKenna.

Retrieved from "https://americandad.fandom.com/wiki/Buckle?oldid=92340"
Community content is available under CC-BY-SA unless otherwise noted.