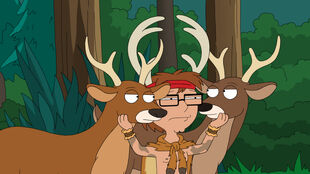 Roger's Disguise: Hayley from "Jack's Back" 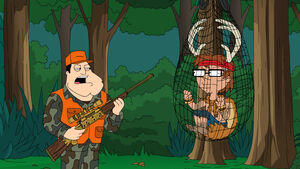 During a father-son picnic, the CIA prepares for a hunting trip but Steve finds himself unwelcome. He tries to impress Stan but fails, deciding to stow away instead. He makes it and despite Stan wishing to take him home, Bullock is determined to start hunting. He is introduced to the CIA hunting command center; a high-tech laser system. However, the guys are frightened when a deer wanders into the compound. Steve picks up a show gun from the buffet, and is encouraged to kill it. He fires and misses, but accidentally kills a larger deer which falls onto the first, impressing the guys with the double kill. At home, Stan brags about Steve's deed, and has expectations of him to tell his tale at the Huntsman's Lodge as part of his introduction as a man. Steve however, feels guilty about having killed the deer, until the pressure becomes too much and he admits he wasn't trying to kill it. Stan tells him that his kill was even bigger because the two deer were parents and now their kids will starve. Shocked, Steve sets out to find the young deer to raise them, vowing to protect them.

Stan and Francine find Steve's note that he left telling of his plans to leave which Stan dismisses. A year later, the CIA goes out on their annual hunting trip. Steve and the deer see the hunters arrive. Steve informs the CIA they will need to leave and not return to hunt again, declaring war when Stan refuses. The deer and the forest creatures lead an attack, destroying the camp and forcing a retreat. Stan refuses to give in and goes after Steve. He captures Steve in a net and plots to kill the deer when they arrive to rescue him, but finds himself flanked and ambushed. The deer start to kill Stan but are called off by Steve, departing as Stan admits that Steve really did become a man in his own way. 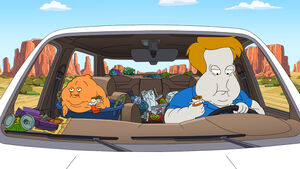 Meanwhile, Roger takes one of his cars out for a spin but misses seeing the odometer turn over. Depressed, he decides to drive another 100,000 miles and he and Klaus set out on a road trip. Almost 100,000 miles later, they break down just short of their goal. They try to push the car but having become bloated from travel, they collapse. In an ambulance, they find they are unable to watch as it also rolls over 100,000 miles and Roger's attempt to get a look flips the ambulance over into a canyon.

In the epilogue set in the future, Roger and Klaus try again, but along the way Klaus dies on the trip. Roger is distracted by a deer in a business suit now living in the Smith home and misses the odometer yet again.