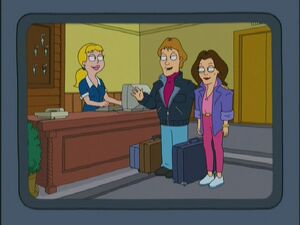 Bruce William Boxleitner is an American actor, and science fiction and suspense writer. He is best known for his leading roles in the television series How the West Was Won, Bring 'Em Back Alive, Scarecrow and Mrs. King (with Kate Jackson), and Babylon 5 (as John Sheridan in seasons 2–5), while his best known film role is as the title character of the innovative Walt Disney Pictures film, Tron.

Bruce voices himself in his role of "Lee Stetson" on Scarecrow and Mrs. King in "Tears of a Clooney". Francine had a bit part in the fictitious episode that was stolen by George Clooney and she wants revenge.

Retrieved from "https://americandad.fandom.com/wiki/Bruce_Boxleitner?oldid=51264"
Community content is available under CC-BY-SA unless otherwise noted.