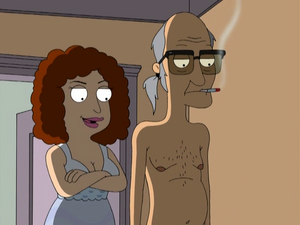 Brian Doyle-Murray is an American comedian, screenwriter and actor. An alumnus of Saturday Night Live, he is the older brother of actor/comedian Bill Murray and has acted together with him in several films, including Caddyshack, Scrooged, Ghostbusters II and Groundhog Day. He has worked in animation as the Flying Dutchman on SpongeBob SquarePants and Cap'n K'nuckles on Flapjack.

Brian Doyle-Murray provided the voice of Al in "Stan's Night Out".

Retrieved from "https://americandad.fandom.com/wiki/Brian_Doyle-Murray?oldid=32678"
Community content is available under CC-BY-SA unless otherwise noted.