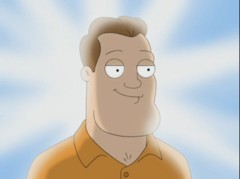 Brett Morris was Stan's best friend in "Dope & Faith" after discovering that they shared much in common. When Stan first met him he had a wife and two children and ran a restaurant, Brett's Breakfast Joint. However, when Stan tried to make him believe in God after Brett reveals that he is an Atheist by blowing up his house, ruining his business and making his wife leave him for another woman he lost just about everything. Brett died, but made an agreement with the Devil, who allowed him to come back to life if he spreads the fame and glory of Satan.

Satan gave Brett a goat guitar and, apparently, gave him awesome abilities to play it. He also likes riding paddleboats, and according to Stan, he played golf.

In "100 A.D.", Brett tried to summon Satan, but was fatally crushed by Bobby the Bullet's flying body. After they died, Brett and Bobby's corpses were dragged into Hell by a Satanic flame from Brett's attempted ritual. He returns in the episode recap and funeral scene in "Son of Stan".

Brett's Satanic guitar from can be seen on the wall at Planet Hollywood in "The Devil Wears a Lapel Pin".

Brett is voiced by Jay Thomas.