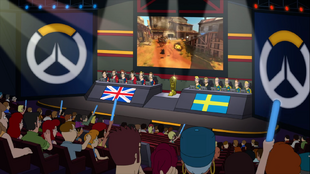 Plot: When most of the family get their heads stuck in the stair balusters with a planned prostate exam for Jeff, finding a home for kittens by Hayley, a job interview for Francine, and Roger just for comedy, Klaus's only way to help them is to bring their appointments to them. 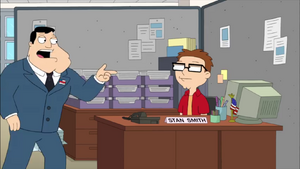 Meanwhile, Stan interrupts father-son day and takes Steve to work so he can attend a meeting. When Stan is assigned to assassinate a North Korean General by infiltrating an Overwatch tournament in Hong Kong, Steve becomes a valuable trainer for the CIA agents, so Bullock secretly enlists him to join the team as a player-coach through Stan. They do poorly in the first round, but, thanks to Korean stem cells lifted by CIA's Dr. Weitzman for increased reaction time, Steve leads them to a comeback to the finals. Awaking the night before the finals, he finds the guys plotting their assassination and becomes angry, particularly at Stan for using him. The guys try to complete their mission and the game, but do badly, missing their target and setting off Nuclear Armageddon. 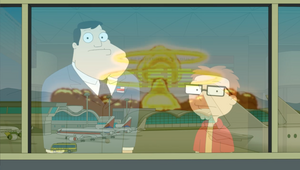 As everyone is vaporized, China and the United States both launch cultural preservation rocket pods. They crash into each other, and the only surviving artifact is a ball of Chinese ice cream which is recovered by aliens a billion years in the future. After sampling it, they want more, but can't recreate it because Earth was destroyed. To bypass this little inconvenience, they recreate the Earth at the exact moment that Stan and Steve were enjoying their father-son day out. However, this time, Stan blows off the meeting, which causes Steve to dedicate his life to proving that something strange had happened and we are living in a synthesized reality. While presenting his theory in 2042, the rest of the family still have their heads stuck in the balusters.