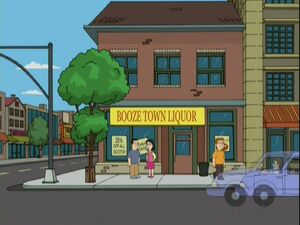 Booze Town Liquor is where Roger tells Hayley that he has a crush on the cashier in "The Magnificent Steven" and asks that she pretend to be his girlfriend, thinking that it would make his crush jealous. The two go to the liquor store and pretend to flirt, but after they leave, Roger declares that he is now in love with Hayley instead.

In "For Whom the Sleigh Bell Tolls", Roger complains to the clerk that he can't find anything strong enough to get him drunk anymore and is directed to a moonshiner who teaches him his secrets.

Retrieved from "https://americandad.fandom.com/wiki/Booze_Town_Liquor?oldid=32399"
Community content is available under CC-BY-SA unless otherwise noted.