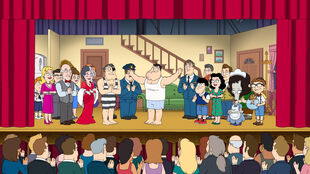 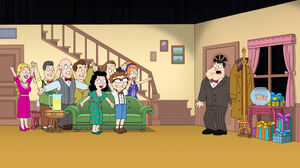 Following Patrick Stewart's presentation of a "lost" play written for American Dad! titled Blood Crieth Unto Heaven, the play opens with Stan's family throwing a surprise birthday party for him despite warnings from his mother. When Francine sends Roger as Edna the maid down to check on the air conditioning, Hayley asks her to check on other "things" as well. Stan arrives and cancels the party, recalling that he has never celebrated his birthday after his father left him and leaves the house to drive while eating crabs. Bullock follows Edna into the basement and seduces her. A police officer returns Stan to his home where he finds that Francine has arranged for his father to join the family.

In the second act, Francine tries to get Stan to bond with his father, but they refuse to communicate with each other. As Bullock and Edna cuddle, they hear the sound of a baby crying and Edna is forced to reveal a hidden infant. Bullock says he cannot be around babies due to a previous lover that lost hers. As he starts to leave, Edna blurts out that the baby is Hayley's and that she agreed to hide her, giving Bullock a moment to pause. As Stan sulks, he hears the sound of Jack and Steve splashing in the backyard pool and angrily breaks up their private party. As he breaks a birthday balloon in anger, it triggers another memory for Stan of the birthday party his father left and remembers catching his mother cheating with a clown. Stan realizes that his father left because his mother drove him away, and as she arrives, he accuses her of being a clown whore. 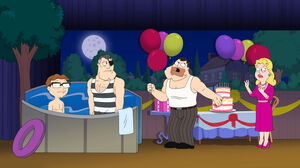 Act three begins with Stan trying to gather his wits after learning the truth about his mother. Bullock confronts Hayley who admits she was hesitant to raise a child, but they pledge their love and rush to their daughter where they find Edna holding a pillow claiming that she and Bullock can finally be together as Hayley and Bullock discover to their horror that their daughter was killed. Stan joyously races outside to try to make amends with his dad who hits him in the face and tells him there is more to the story. Jack returns to the story as Stan remembered it but reveals that he was the one in the clown costume in order to please Stan for his birthday. Jack had used the costume to commit robberies of produce to feed the family, and Stan's police chief hero attended the party and figured out the culprit, forcing Jack to go on the run to avoid arrest. Stan is faced with the realization that he was the one who split his family apart as Steve, frustrated in his attempts all throughout the evening, finally gets to present Stan with the gift he has for him: an antique army pistol, which Stan uses to blow his brains out in front of the family, leaving Klaus to close the play noting that Steve's only inheritance was his father's guilt.