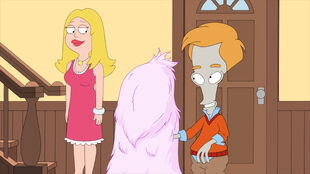 Blagsnarst: A Love Story
Roger has a fling with another alien. 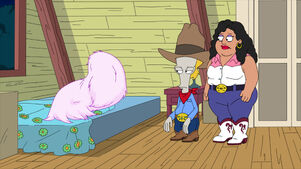 On the way to work, Stan gets annoyed by Roger's surprise entrance and clinginess which affects the entire family. Accompanying Francine on a trip to the mall, Roger picks up a pheromone trail and follows it until he finds a crashed spaceship with a female alien who was also attracted by his scent.

They take her home to meet Stan, who becomes afraid that the CIA will discover her. Even as he worries, the CIA is conducting an investigation of her crash site. Roger and the alien become sexually attracted to each other which distresses the entire family. But after their fling, Roger is ready to dump her only to find she is ready to settle down with him. Roger tries to claim he already has a girlfriend but the ruse fails. Despite her insistence that Roger make things work, he decides to take her into the countryside. 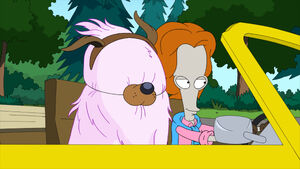 Pulling over at a gas station, Roger calls the CIA to turn her over at a bed and breakfast for them. Stan gets word of the CIA on their trail and he admits that he called them as they can be heard approaching. Stan points out that she can lead them back to the family and Roger takes her away and proposes they go their separate ways. Handing her cash, he leaves her behind as Bullock spots her dog disguise from a helicopter and attempts to intercept her after it falls off as Roger cheers her on. But when the CIA corners her, he decides to intervene by building a high-powered rifle out of stones, sticks and his bubble gum. He manages to shoot down a tree which crashes onto the copter. As they leave together, she continues with her future plans together until Roger bails out of the car and it crashes in flames, burning off her extra fur to reveal her new identity of Kim Kardashian. 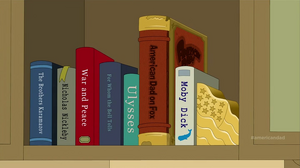 Meanwhile, in prison, Marylin Thacker is executed for the murder of her husband. Her son returns to the family home in sadness as he prepares for an election as attorney general. As his son is hit by a car outside, he discovers a secret hiding place under the floorboards containing The Golden Turd. Ignoring everything else in his life, he calls Wyatt Borden, a wealthy chemical dumper that pledges to help him and even make him president one day.

The episode ends with Stan reading the episode as a book to the family titled American Dad on FOX. When he finishes, he symbolically "closes the book" on American Dad's run on FOX and places it on the shelf.

Retrieved from "https://americandad.fandom.com/wiki/Blagsnarst:_A_Love_Story?oldid=78731"
Community content is available under CC-BY-SA unless otherwise noted.