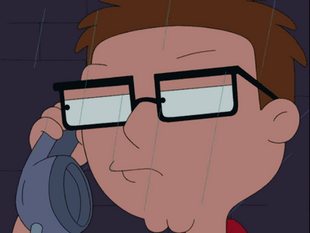 Black Mystery Month
Steve and Stan set out to find The Jar of Proof.

Plot: While researching a paper about George Washington Carver in celebration of Black History Month, Steve discovers a mysterious symbol consisting of a peanut in a pyramid. He asks Principal Lewis to extend his work but as he leaves, the camera zooms in on the same symbol as a tattoo on his left wrist, he calls someone, saying "We've got some chocolate in our peanut butter." 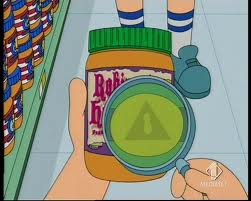 Steve calls the curator of the Smithsonian Peanut Museum, figuring the symbol is nothing but the curator says it is very huge and says that "the truth must come out" but warns Steve that "they" are watching him. Just then, Steve is nearly run over by a car but it is actually a drunk driver. The next day, Steve learns that the curator was mysteriously murdered, leaving a dying blood message saying, "In the elf condom", which the police assume to be "a horny midget who plays it safe." But Steve's selective dyslexia rearranges it to "Find the monocle". He locates the monocle in the curator's clock, which has the symbol on it. But as he leaves, a car pulls up and a man steps out, saying he had won a free air conditioner. At first excited, Steve then recoils when he sees the symbol on the man's neck, who pulls out a gun. He is luckily saved by the same drunk driver. But the other assassins chase him into an alley, where he is carried away by a black masked figure who turns out to be Stan. He explains to Steve that he just stumbled onto the most dangerous secret in American history and those men want him to pay for it with his life. He advises Steve to give up his quest, only for Steve to show him the monocle. But due to Steve's refusal to do so or give up, Stan agrees to help him.

In a bank vault, Stan explains that the true inventor of peanut butter was Mary Todd Lincoln, President Lincoln's wife, as a means of keeping away evil spirits. Shortly before the end of the Civil War, Lincoln feared that the South could only be forced into abolishing slavery and this would lead to further conflict. He then realized that the butter would be an ideal method of making the Southerners accept blacks as their equals by introducing the delicious snack to the South and crediting the invention to a black person. However, before the plan could be put into action, John Wilkes Booth got wind of the plan and shot Lincoln.

31 years later, the plan was revived by President Grover Cleveland. Cleveland heard of a young black botanist, Carver, who had invented over 300 uses for peanuts. Cleveland constructed an ingenious plan to allow Carver to receive credit by leaving a jar of peanut butter to an unknowing Carver, who received the credit for the invention. Stan further explained that there was a legendary "Jar of Proof" that had evidence proving that Carver had not invented it, but an organization called the Illuminuti was dedicated to finding the Jar and destroying it, fearing that the truth would cause the country to descend back to racism and hatred.

Steve decides that the truth has to be revealed, and Stan agrees. He brings up a map he found years ago which can only be read by the Monocle but it is a message to find the pole that bore Old Glory. At a strip club, Stan assumes that it is a flag but Steve finds out it is actually a pole shaped cane that bore America's first stripper. Using the artifacts in conjunction on the message with the sun in the sky, it burns up, revealing another message, leading to the National Botanical Garden, finding a big hat like the one on President Peanut. They deduce that they must go to the first "President Peanut" and head to the Lincoln Memorial and place the artifacts on Lincoln's statue that leads them underground, where, in the middle of a pit of lava, they discover a small rocky island with the Jar of Proof.

Stan strains to reach the Jar, and as he does, Steve notices the symbol of the Illuminuti tattooed on his back. He manages to switch the jar with a regular peanut butter jar and attempts to run away, only to bump into President Jimmy Carter, the second President Peanut, the man who has been secretly following them and crunching peanuts in his hands in frustration. Carter and Stan both explain to Steve that the American people can never know the truth about peanut butter, because it will lead to the end of racial harmony. Steve denies this, convincing Stan that America is grown up, who winks and gives the backpack with the Jar to Carter. Shortly afterwards, Carter is hit by falling debris and falls into the lava pit along with the backpack. Stan and Steve then escape the collapsing temple and then realize that Stan failed to switch the jars.

They don't actually have the Jar of Proof, so Steve decides that there is one place where a person can put out crazy information with no evidence that millions will accept as true, and writes an article called "The Truth About Peanut Butter" on Wikipedia. Stan also agrees to take the Internet blocks off Steve's computer.

Meanwhile, Hayley and Roger play Jenga. Roger takes forever to make a move, thinking, getting an engineer for advice and making a second stack to test his move beforehand; finally he makes a move, and then screams at Hayley as she hesitates a moment before moving herself.