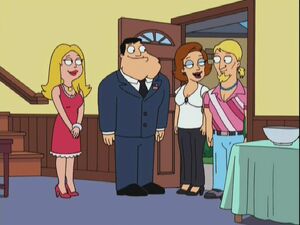 Bjorn is one of the Lisa Collins boytoys in "I Can't Stan You". Lisa shows off her Norwegian fisherman she picks up while ignoring the kids at the Smith's house party that Stan throws while trying to make himself liked by the neighbors.

Bjorn is one of the war re-enactors in "In Country...Club".

Bjorn is voiced by Chris Diamantopoulos.

Retrieved from "https://americandad.fandom.com/wiki/Bjorn?oldid=51123"
Community content is available under CC-BY-SA unless otherwise noted.