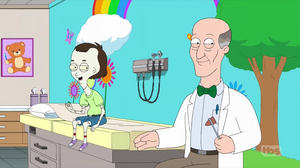 Billy is the creation of Dr. Kalgary, a surgeon that Steve visits on the advice of Klaus to become taller in "Roots".

Although he elected to have the surgery after thinking it over, Steve starts to have second thoughts after meeting Billy, but is knocked out before he can get away. Due to Stan's smashing of the building with a wrecking crane, he faces being dropped from the remains of the building until he is saved by Stan. As the police approach, Dr. Kalgary instructs Billy to fly away. But as two large metal wings sprout from his back, he drops backwards from the weight onto the floor.

Billy is listed as a possible owner of the mineral rights under the Smith property in "Mine Struggle".

Billy aids Dr. Kalgary when he becomes Roger's physician in "Roger's Baby" as he attends to the rebirth of Jeff and is the ring bearer at his wedding in "Family Plan".

The Doctor and Billy both appears in Klaus' rap video in "The Never-Ending Stories". Billy was also to be a panelist for the Mayoral election in "Railroaded" before the segment is cut short.

Billy, while a senior at Pearl Bailey High School, only gets to play Jr. varsity football in "Mean Francine".

The Doctor and Billy attend to Roger when he develops a 'tumor' in "Persona Assistant".

Billy receives a new tongue for Christmas and can now speak faster in "Salute Your Sllort". He helps Steve and his friends attempt to find a real killer after their friend Sllort is blamed. While working in the police crime lab, Billy discovers that the body is actually the one the boys believe is the killer, and that Sllort is actually a murderous troll.

Retrieved from "https://americandad.fandom.com/wiki/Billy_(Roots)?oldid=91234"
Community content is available under CC-BY-SA unless otherwise noted.