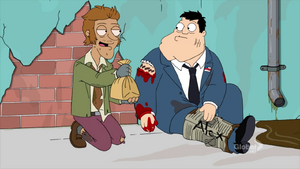 Billy is a street person that befriends Stan Smith as he attempts to patch himself up after being run over by Roger and Steve in "Less Money, Mo' Problems" when he ends up on the streets after making a wager with Hayley and Jeff Fischer that he could survive on Jeff's minimum wage. After signing Stan's makeshift cast as "Alex" and getting Stan high from huffing his body waste in a paper bag, Billy talks Stan into robbing a home. Stan chooses his own as he knows about the contents and the hidden key under the fake rock in the yard. After they enter, Stan directs Billy to take a lamp which he knocks over, alerting Jeff who stabs Billy and cuts Stan. After Stan concedes that it isn't possible to live on minimum wage, Billy comes to prompting Jeff to stab him again. Billy plays Pictionary with the family using the bloody knife in his back, eliciting a correct answer from Francine of the Great Pyramid before collapsing and flipping the knife from his back into his head.

Billy can be seen waiting to enter the East Langley Soup Kitchen in "Kung Pao Turkey".

Retrieved from "https://americandad.fandom.com/wiki/Billy?oldid=54521"
Community content is available under CC-BY-SA unless otherwise noted.