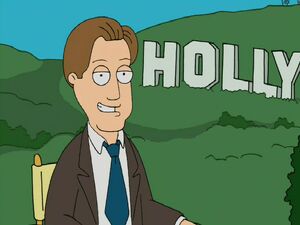 William James "Bill" Pullman is an American film, television, and stage actor. His first prominent movie role was in the film Ruthless People (which starred Danny DeVito and Bette Midler). Other notable films included the lead in Spaceballs, The Serpent and the Rainbow, While You Were Sleeping, Independence Day, and Lost Highway.

"Forgettable Actor" Bill Pullman appears in a video presentation in "Francine's Flashback" that convinces Stan that the best way to handle Francine's memory erasure that he had performed because he forgot their anniversary is to have Francine believe that she is indeed still 18 years old.

Bill appears as one of the celebrity robots in "Tearjerker" and is seen in the audience in "Phantom of the Telethon".