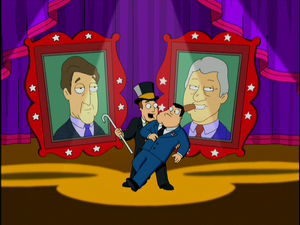 William Jefferson "Bill" Clinton (born William Jefferson Blythe III, August 19, 1946) is the former 42nd President of the United States and served from 1993 to 2001. His wife, Hillary Rodham Clinton, is the 67th and former United States Secretary of State. Later he was impeached for perjury and obstruction of justice in connection with a scandal involving a White House intern, but was subsequently acquitted by the U.S. Senate.

Stan has a flashback of getting Hayley to eat her vegetables to fend off Bill Clinton in "Stan Knows Best".

Bill is mentioned along with John Kerry in "We're Red and We're Gay" in "Lincoln Lover" as Greg Corbin notes that homosexuals are thought of as only voting for Democrats.

Retrieved from "https://americandad.fandom.com/wiki/Bill_Clinton?oldid=68892"
Community content is available under CC-BY-SA unless otherwise noted.