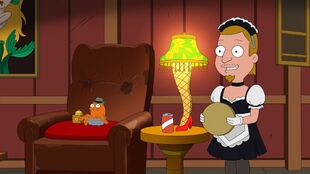 Beyond the Alcove
Francine becomes jealous of Klaus. 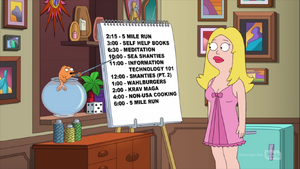 Francine gets annoyed when Klaus takes over her dinner party and vows to get even, but finds that everyone supports him in one way or another. She attempts to throw an even wilder party the following night, but when everyone gravitates to Klaus yet again, she tries to get their attention by getting drunk, but ends up falling off the roof of the house. She awakens in the hospital with Klaus by her side, and he reveals that he became popular due to following self-help advice from Mark Wahlberg. Francine puts herself under his training to become equally popular, but eventually gets reminded by Roger that Klaus sucks. When she tries to return his self-help books, she finds that there's a hidden lair behind his alcove, where he reveals that he's secretly been hypnotizing people to like him, and has hypnotized her as well. She tries to deny it, but he demonstrates and puts her under his control. 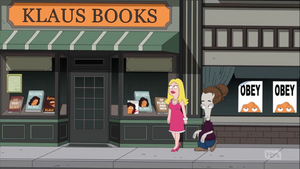 She recovers in a hot tub far from Langley two months later, where she was taken by Roger, who reveals that the entire town has been placed under Klaus' control. When they return in an effort to free everyone, they get caught and Roger rats her out, but she is helped by Parker, who is leading a resistance of cats. He reveals that they have discovered a code phrase that will free everyone from Klaus' hypnotism, but after she uses it on the family, they reveal that they are willing to keep serving Klaus because they think he is cool. In a last ditch effort to stop his plot, Francine is able to use his equipment to broadcast the release phrase to everyone, and then plays his podcast to show he's not really cool.

Previous Episode /// Beyond the Alcove \\\ Next Episode