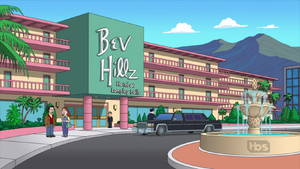 The Bev Hillz Hotel at Langley Falls is where Rod Stewart stays prior to the opening of his restaurant, Art of Stew, in "Comb Over: A Hair Piece".

In order to salvage his reputation of hair stylist to the stars, Roger's persona of Josay Bosay, after having reputation ruined by Stan's criticism of his Rod Stewart 'forever' cut, which turns out to be the only style all he knows, proposes giving Rod Stewart a new style when they discover he's in town for the opening of his restaurant. but when they ambush him in his limo outside of his hotel, he rejects their idea, so they end up kidnapping him.