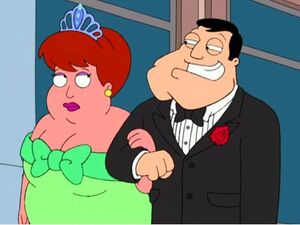 Betty Sue was one of Francine's high school schoolmates. She has orange hair and is overweight due to losing to Francine for Homecoming Queen election in "It's Good to Be the Queen". Francine's old friend, Quacky, told her when she lost, she went into a Dunkin' Donuts and never came out. It is then revealed she had two uncounted ballots for her. When Stan found this out, he talked to Francine, and she said to him, being sarcastic, told him to go to the dance with Betty Sue. He decided to go with Betty Sue, and told Bill, Stan's double, to take Francine to a restaurant, and keep her busy while he's at the dance with Betty Sue. Soon afterwards, Stan realizes his mistake and tries to get to Francine. Francine then goes to the dance with Bill shortly before Stan leaves. Betty then calls "Stan" a son of a bitch and kisses him.

Betty Sue appears in the audience in "Phantom of the Telethon".