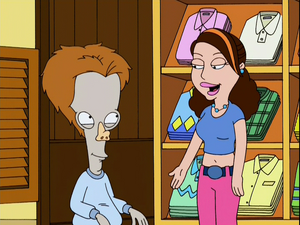 Beth is a student at Pearl Bailey High School.

Beth appears in "Stan Knows Best", where she and Frankle are seen together. Since his brother's arm got injured, she feels sympathetic for him.

She can be seen dancing at the Theta Sigma (ΘΣ) party in "With Friends Like Steve's".

Beth appears outside of Eleven in "Lincoln Lover" and in the crowd of street racers in "Dungeons and Wagons".

Beth is shown to be working in a clothing store in the Langley Falls Shopping Mall in "Four Little Words".

In "Escape from Pearl Bailey", Beth is seen at the school election.

Beth appears in "Chimdale" where she is seen spying on Steve in the boy's gym showers. She notices that his spine is curved, and tells him to get it straightened out.

Beth watches various high school football games, usually with Steve Smith and his friends in them in "Every Which Way But Lose".

Beth appears in "Daddy Queerest" in the school gym, where she is shocked by the fact that anyone can get drunk and make out with a girl like Jewel. After this horrifying story of how Steve Smith did just that, she is seen running out of the gym, throwing a beer bottle into a recycling bin.

At Hershy Park in "May the Best Stan Win", Beth witnesses a man dressed up like a Tootsie Roll got sliced in half, only to see that there was 2 midgets in the costume that both survived.

In "Bully for Steve", Beth is seen on the ferris wheel at the carnival. She is later seen when Stelio Kontos beats up Stan.

In "Brains, Brains and Automobiles", when Steve, Snot, Toshi, and Barry wear thongs to their camp, the boys in the camp get angry and hurl them over to the girl's side of the camp. Beth is in the girl camp.

She attends the My Morning Jacket concert in "My Morning Straitjacket".

Beth also appears in "License to Till", where she is shown walking down the school hallway, when she suddenly sees Steve's fake wiener and is surprised by it.

Beth sits behind Stan and Francine at the Cirque du Hey Hey Hey in "Stanny-Boy and Frantastic".

She and Melissa are friends with Roger's persona of Bing Cooper, a sexually-active high school student in "I Am the Walrus". Beth confronts him when she finds an acceptance letter to UCLA, believing they were going to Arizona State University together. Roger admits that he only wished that she found out when he didn't show up at Arizona State. Beth is voiced by Janna Levinstein.

Beth appears at Vince Chung's party in "Adventures in Hayleysitting".

Beth witnesses Steve lose the ham out of his pants to Barry in "Naked to the Limit, One More Time".

Beth and a friend try on clothes at Forever Barely Legal while Steve and Snot collect pubic hair samples in "Steve and Snot's Test-Tubular Adventure".

She can be seen in the audience of the talent show in "The Talented Mr. Dingleberry" and at the fashion show in "Mean Francine".

Beth not only assists Klaus and Jeff with the fake train hijacking in "Stan & Francine & Connie & Ted", she can also be seen at the Turgid Springs Nudist Resort.

She is also present at Oedipus Rox in "Tapped Out" and in the high school cafeteria in "The Chilly Thrillies".

Retrieved from "https://americandad.fandom.com/wiki/Beth?oldid=93009"
Community content is available under CC-BY-SA unless otherwise noted.