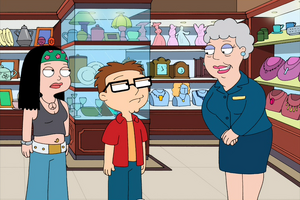 Barret Swatek is an American actress and comedian who has appeared in movies such as The Forty Year Old Virgin, Lethal Weapon 4, and On Edge. She had a recurring role as Cheryl in Seventh Heaven, and played the role of Brittany on the television show Quarterlife. She is a frequent contributor to Fox late night show Red Eye.

She provides the voice of the shopkeeper in "Shallow Vows".

Retrieved from "https://americandad.fandom.com/wiki/Barret_Swatek?oldid=63362"
Community content is available under CC-BY-SA unless otherwise noted.