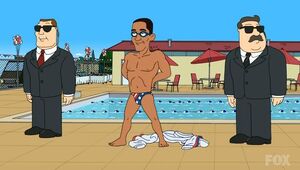 Barack Hussein Obama II is the 44th President of the United States. He is both the first African American and Hawaiian to hold the office.

President Obama appears in "An Incident at Owl Creek" when Stan plans to hide his shame in defecation into Buckle and Sharri Rothberg's pool by getting Obama to make the same faux-pas. When the plan fails, President Obama tells him he needs to ignore what other people think and not let the laughs get to him. President Obama is voiced by Dave Van Dam.

In "Finger Lenting Good", Jeff tries to set Stan up to get his finger chopped off by making him yell at his statement; which is that Barack Obama has an amazing healthcare plan.

Avery Bullock says they faked the original shooting of Osama bin Laden to make the President look good while they are on a mission to take him down for real in "The Boring Identity" where he is managing a Doug & Busters in Gainesville, Florida.

A portrait of President Obama hangs in the lobby at CIA Headquarters in "N.S.A. (No Snoops Allowed)".

Klaus claims to not know who Barack Obama is in "Men II Boyz".