For a complete script, see: "Bar Mitzvah Hustle" on the Transcripts Wiki

Roger: And what Steve doesn't realize is while everyone's focused on Snot, I'll be heading to the bathroom to share a doobie with the busboy in exchange for an angry handy-J.

Debbie: Steve, I didn't know you could dance.
Steve: I can do a lot of things. Yesterday, I gave myself a prostate exam, then had a coffee. Though if I could do it over again, I'd probably reverse the order...

Steve: Etan cares about his bar mitzvah more than anything, right? And what do kids get for bar mitzvahs? Gifts, and lots of 'em.
Roger: [snaps fingers] Say no more! [pause] Okay, say more. I don't... I actually don't know where this is going.

Stan: Francine, you know I only laugh at Two and a Half Men. Charlie Sheen sleeps with whores, then has breakfast with a fat child. It's funny just talking about it.

[The day after Snot has been accused of robbing Etan's bar mitzvah]
Etan: He's not going to have a bar mitzvah! Because I'm taking you in front of the Beth Din!
Snot: The Beth Din?!?
Students: I don't know what that is. Beth Din...etc.
Snot: What's the Beth Din?
Skinhead: The leader of a group of Jewish elders. Your culture is a very rich one which we despise.
Etan: Once the Beth Din hears what you did, not only will you be kicked out of our temple, no other temple will take you. You'll never be bar mitzvah-ed. Doomed to walk the earth for the rest of your days as a child.
[exits the scene] 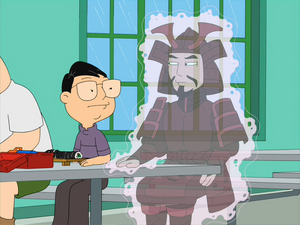 Snot: The rest of my days as a child?!
Toshi: Speak for yourself. I had to spend the rest of my days haunted by a 12th century shogun warrior's ghost.
[The ghost of a samurai warrior ghost appears next to Toshi]
Samurai warrior: [Japanese with subtitles] You know they can't understand you.
Toshi: You're right, Minamoto. The clam chowder IS quite good.

Etan: Let me down! They’re stealing my presents. [Screaming like a girl while every guest gasps] THEY’RE STEALING MY PRESENTS!!!!!!!!!!!

Retrieved from "https://americandad.fandom.com/wiki/Bar_Mitzvah_Hustle/Quotes?oldid=88103"
Community content is available under CC-BY-SA unless otherwise noted.