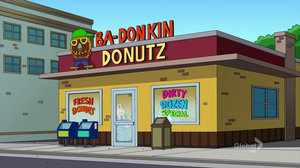 When Steve becomes insecure because his rear hasn't formed, he spots Principal Lewis walking though the school and notices his shaped rear end. When he asks how he got such a butt, Principal Lewis shows him a box of doughnuts from Ba-Donkin Donutz. Going to the shop, he observes all manner of overweight people and their bubble butts. After getting himself a dozen and settling in to partake, a fire breaks out caused by sparks from another patron's corduroy pants and sets all of the doughnut grease on fire. When the patrons block the doorway in the effort to escape, Steve finds he is the only one still small enough to get through the mass of humanity wedged in the door frame. When he attempts to call for help, he loses focus thinking about how fine his life really is and fails to finish asking for assistance, walking away as the doughnut shop explodes.

Retrieved from "https://americandad.fandom.com/wiki/Ba-Donkin_Donutz?oldid=41396"
Community content is available under CC-BY-SA unless otherwise noted.