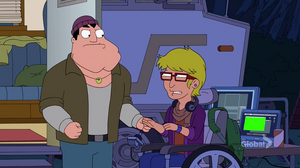 Artemis is a member of an Occupy cell that kidnaps Stan after he tries to infiltrate their group in "Honey, I'm Homeland".

To brainwash him, they perform leftist-themed torture on him while in captivity. They manage to turn Stan into a leftist mole in their plot to blow up national monuments, starting with reconfiguring Mount Rushmore with leftist heroes. Hayley succeeds in getting through to Stan to break his brainwashing, but when they embrace after Stan disables the group and beats Artemis to death with his wheelchair, the missiles are launched.

The monument opens up with an anti-missile defense that takes out the incoming rockets as Avery Bullock arrives and announces that it was a test of the defense as is revealed that his compatriots were actually CIA members in disguise, leaving him as the only true terrorist as Bullock notes that his son may seek vengeance on Stan some day, but since he is also in a wheelchair, all Stan has to do is climb a stair or a curb to escape him.