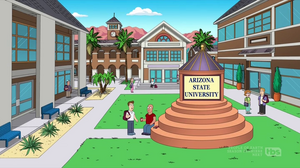 Arizona State University (also known as ASU or Arizona State) is a public university on five campuses across the Phoenix metropolitan area, and four regional learning centers throughout Arizona.

Hayley's video about Francine in "Helping Handis" receives a grade of "Check Plus Plus;" the highest grade ever given at Groff Community College which, she notes, "is like a C at Arizona State."

Beth confronts Roger's character of Bing Cooper when she finds an acceptance letter to UCLA, believing they were going to Arizona State together. Roger admits that he only wished that she found out when he didn't show up at Arizona State.

Klaus claims that Steve hopes to attend college at Arizona State due to the 'sluts on campus' in "A Nice Night For a Drive".

Klaus takes Steve on a tour of ASU when he is concerned about missing the college fair in "The Life and Times of Stan Smith". Steve is reluctant due to the school's reputation for partying, which is borne out by the library not opening until 'Todd wakes up' and the 'ASU School of Bizness' closing at 'Beer Thirty.' He tries to escape, but is caught and returned by security, who also happens to be the dean. After a week of imprisonment, Steve is rousted by Klaus who informs him that he has graduated from the college for answering a single question in science class, becoming valedictorian as well during which his speech earns him a Ph.D and five Bud Ices.

Denise Richards Hall on the ASU campus is where an older Steve presents his theory that we are living in a synthesized reality in "Brave N00b World".

Retrieved from "https://americandad.fandom.com/wiki/Arizona_State_University?oldid=88774"
Community content is available under CC-BY-SA unless otherwise noted.