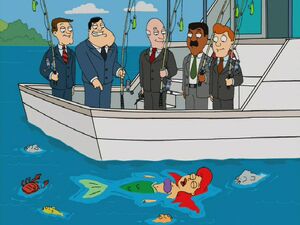 While on a CIA fishing trip in "Francine's Flashback", CIA helicopters kill a mermaid that looks like Ariel from Disney's The Little Mermaid.

Klaus makes a painting of an Ariel figure in his fishbowl in "License to Till".