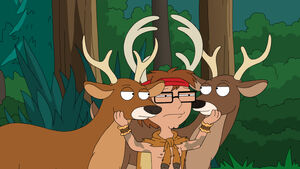 Applejack & Dignan are two deer that Steve raises after he unintentionally makes them orphans in "Buck, Wild".

When Steve decides to spare a doe that wandered into the CIA hunting camp, he fires his shot from a display gun into the air, accidentally killing a large buck in a tree which impales the doe with its antlers as it falls. At home, Stan brags about Steve's deed, and has expectations of him to tell his tale at the Huntsman's Lodge as part of his introduction as a man. Steve however, feels guilty about having killed the deer, until the pressure becomes too much and he admits he wasn't trying to kill them. Stan tells him that his kill was even bigger because the two deer were parents and now their kids will starve. Shocked, Steve sets out to find the young deer to raise them, vowing to protect them.

A year later, the CIA goes out on their annual hunting trip. Steve and the deer see the hunters arrive. Steve informs the CIA they will need to leave and not return to hunt again, declaring war when Stan refuses. The deer, now named Applejack and Dignan, and the forest creatures lead an attack, destroying the camp and forcing a retreat. Stan refuses to give in and goes after Steve. He captures Steve in a net and plots to kill the deer when they arrive to rescue him, but finds himself flanked and ambushed. Applejack and Dignan start to kill Stan but are called off by Steve.

Retrieved from "https://americandad.fandom.com/wiki/Applejack_%26_Dignan?oldid=74815"
Community content is available under CC-BY-SA unless otherwise noted.