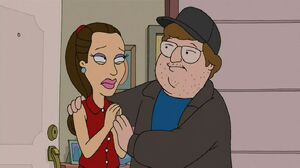 She appears as one of the celebrity robots and on the cover of a magazine about celebrities adopting babies in "Tearjerker". The same Us Weekly magazine has become a running gag on the show.

Stan describes Roger as a combination of "Mary, Queen of Scots, Brangelina and Jesus" in "Weiner of Our Discontent", referencing her marriage to actor Brad Pitt.

Angelina is voiced by Odile Corso.

Retrieved from "https://americandad.fandom.com/wiki/Angelina_Jolie?oldid=54164"
Community content is available under CC-BY-SA unless otherwise noted.