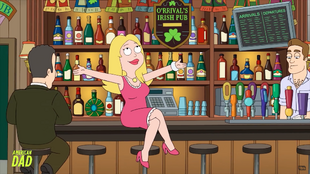 An Irish Goodbye
Francine and Hayley take a break from their husbands. 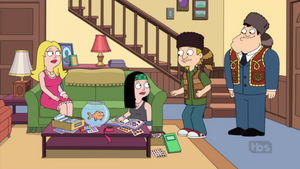 When Stan and Jeff's Davey Crockett game annoys Hayley who can't understand how Francine can put up with it, the latter tells her it's because she's not a great wife. But when she takes off on an airport shuttle, Hayley gets curious and decides to follow. She finds she's taken up hanging out at an airport bar and admits that Hayley is better at just about everything other than marriage than she is. A follow-up day finds them starting a bar fight to blow off stress, but when it and their happy hour is over all too quickly, Francine reminds Hayley that they'll be back the next day. But when Stan and Jeff get frightened while camping in the backyard, Francine finds that Hayley has ditched Jeff to go Costco. When Francine confronts her over her pub life taking control, she drags her home. But the following day, she finds that Hayley has ditched her life to go pub crawling in Ireland. 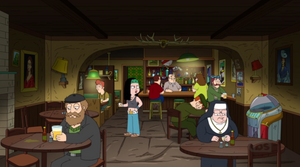 Irish pub life is not quite what she expected, but she does succeed in getting a good bar fight going. Meanwhile, Francine finds herself stuck with Jeff, but perks up a little bit when he actually does what she tells him to do, so together, they set off to bring Hayley back. Hayley finds that she's not allowed to leave until she pays for the pub's jukebox that she wrecked in her fight, but with Francine and Jeff's arrival, they put him to work for her. Returning home, they find Stan has turned the house into a replica of the Alamo, so they decide to go back to the airport for one more drink.

Retrieved from "https://americandad.fandom.com/wiki/An_Irish_Goodbye?oldid=84014"
Community content is available under CC-BY-SA unless otherwise noted.