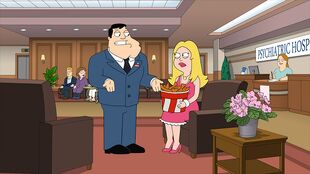 Rubber Room for one

Plot: A Chinese businessman named Fung Wah introduces the episode as the new owner after Seth MacFarlane gets bored with the series and trades it for a shoe factory. He assures watchers that things will remain as they have known.

Bullock calls Stan to wish him a happy anniversary, noting that he always forgets it, which he has done once again. Bullock offers him several solutions, and gives Stan the idea to have Francine temporarily committed to a Psychiatric Hospital to buy himself some time. As Francine waits outside of their home, suspicious of Stan watching her from across the street, a van pulls up and carries her off. At the mall searching for a gift for Francine, Stan goes on a shopping spree for himself, getting a call three days later at work that the hospital is ready to release her. 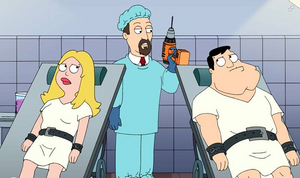 He goes to Francine and she gets angry about being committed, although Stan tries to brush it off until Francine blurts out that she hates him repeatedly, getting herself re-committed in the process. Stan visits and her doctor tells him that he is the one setting her off. However, Stan's insists in seeing her and tries to break into the hospital to free her. Finding out that she is at the hospital talent show, he locates her and tries to create a distraction to slip her out. But he has to perform in place of a patient that he knocks out. As he tries to drop instructions to Francine about his escape plan, she is unresponsive due to being heavily medicated. When the orderlies find out that it is Stan, he drops his disguise and runs with her in her wheelchair towards the exit. However, he gets tranquilized and they awake in a hospital operating room. The doctor arrives and tells them that they are due for lobotomies for being disruptive. As the doctor drills Stan's skull, he loses his cognitive ability. 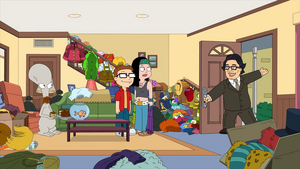 Meanwhile, Roger decides to sort through his closet when he reaches maximum capacity in his closet and causes an avalanche of outfits, although he has a hard time getting rid of items as Steve reads a newspaper story that the billionaire that purchased the show has increased his fortune. Hayley tries to help Roger sort things as Wah makes an animated appearance to plug the show. Later, Wah stops by again to take everyone on a trip, they insist on finishing their project until Fung points out an unused closet in the living room and their problem is solved. When they want to know more about their coming adventure, Wah just hints that it will be a surprise. In the big city, the characters voices suddenly change to Fung's. He digs up a slab of sidewalk and finds a treasure as he asks the viewers to keep watching the show.

Wrapping up Stan and Francine's story, Fung presents a live action clip of them going on a tropical vacation and buying Fung's products. Finishing, Fung tells of selling the show to another Chinese buyer for a profit as the new buyer names the show American Chinese Dad!. Cutting to a clip, the family speaks Chinese while working in a rice paddy as Chinese peasants. Hitting what they believe at first to be a rock, "Mickey Mouse" appears to lead them in song and dance to finish the show.

Retrieved from "https://americandad.fandom.com/wiki/American_Fung?oldid=78747"
Community content is available under CC-BY-SA unless otherwise noted.