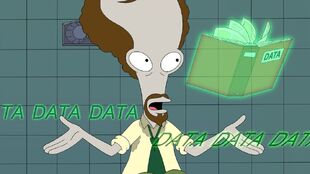 American Data?
Steve and his friends take part in a prison experiment. 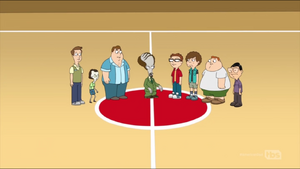 Steve and the boys had tried to save up for calf implants from Doctor Kalgary, but when they check their secret stash, Steve has to confess to taking $100 for a designer backpack. While checking the newspaper for ways of making the money back, they find an advertisement for a science experiment to take place in the Pearl Bailey High School gym, which turns out to be run by one of Roger's personas. The experiment involves dividing up everyone into teams of guards and prisoners, and after several misfires, the boys are selected to be guards. But when their treatment of the 'prisoners' becomes too harsh, the latter quit, so Roger rents real prisoners, who quickly turn the tables on the boys. 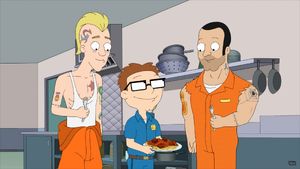 When Barry starts to suffer from hunger pains, the prisoners allow Steve to fix a meal, which pleases everyone, although the guys become uncertain about his relationship with his new friends. He insists that it's just the way to get on their good sides to get better treatment. But as he searches the school pantry for treats, he knocks over a bottle of olives and discovers that a floor drain leads out of the school. But when he finds his friends guarded, he decides to try to depart on his own, but gets lost in the drain system. Spotting some light, he pushes his way up and through, where he finds both his friends and what turns out to be white collar prisoners having a pizza party. However, he is still in hot water with his friends who feel he abandoned them, not to mention that Roger only pays part of the money promised, so his friends decide to get their calf implants without him. Steve catches up with the guys outside of their stash place and tries once again to apologize, but they refuse to hear him out. However, the keeper of the stash reveals that Mertz robbed the place and they blame Steve for causing them to delay pulling their money out. Without any other options, Steve volunteers for multiple experiments, but when participating in electroshocks with Roger, the guys reveal they've been controlling the experiment and are ready to forgive him. Dr. Kalgary is able to set them up with calf implants for $50 each, as well as butt implants, which are admired as they walk. 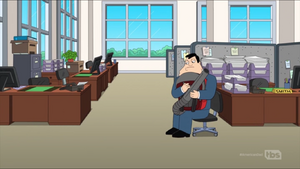 Meanwhile, when Bullock announces that the CIA groundskeeper has passed away, Stan is tasked with throwing away his sole possession, a leaf blower, due to being the only one aware of his existence. Stan's malaise begins to get on the family's nerves, so Francine takes him to consult with Dr. Ray Petit. The doctor convinces him that a possible way to honor his memory is to clear the central quad, which he never had clearance for, but Stan does. As he finishes, a whirlwind spirit forms and thanks Stan for completing his dream. As he prepares to finish the job by blowing the whirlwind into the sky, Dr. Ray gets caught up and nearly gets carried away. Stan angles the blower slightly so Ray starts to fall back to the ground, but then readjusts it to slow his descent. Dr. Ray's mouth lands on the blower until he fills up with air and explodes, as Stan walks happily away.