The Smiths return from a difficult, quarrelsome vacation, but they can't get a break from each other.

Wheels and the Legman try to hunt down the perpetrators who destroyed Steve's secret swimming hole. Meanwhile, Klaus helps an aging Principal Lewis reclaim his confidence.

Stan and Francine inject some much-needed fire into their relationship.

Francine is jealous of the new and improved Klaus and vows to take him down.

Disney television has announced the times for its virtual ComicCon panels. Join Matt Weitzman as he walks you through the creation of an upcoming episode of the current season airing on TBS. You’ll see a table read, featuring stars Rachael MacFarlane, Wendy Schaal, Scott Grimes and Dee Bradley Baker, followed by parts of the episode in the animatic and early stages of color. The American Dad! panel will be at 8pm ET (5pm Pacific) Saturday, July 24th.

The San Diego Comic-Con has been canceled this year due to the Corona virus, but they are still hosting virtual panels for 4 days. American Dad!'s panel will be Saturday, July 25 at 1pm PT, where, in addition to show information, they will be showing how to draw Roger.[2]

TBS has handed out a two-season renewal for animated comedy American Dad!, taking it through 2022. [3]

According to SyFy, the player, as Stan, attempts to clone Roger in order to save the rest of the family from aliens.[4] 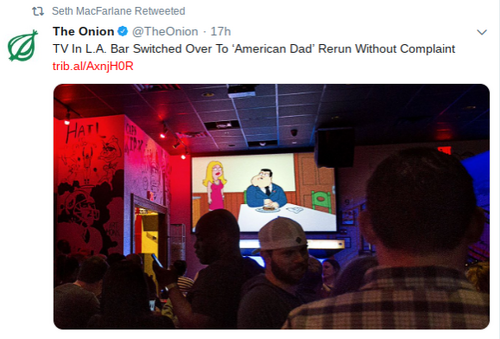 At the New York Comic Con, the American Dad! panel reported that the show will be returning in January of 2019 and running off 31 episodes though October. Plots include Snot will be coming into some serious money and Hayley is finally going to graduate from college. Klaus has a whole lot of things coming down the line, including a love story, a fake death and a parody of Pixar's Inside Out. The talking fish will also be joining a nunnery, though in all likelihood that won't go well for him. [5]

TBS has renewed American Dad! for two more seasons, leading the way for an hour-long animation block with Final Space, a new show about a prisoner in space.[6]

Hulu has made a deal with FOX television to carry all episodes of American Dad!, as well as other animated shows such as The Cleveland Show, Bob's Burgers, Futurama and more.[7] 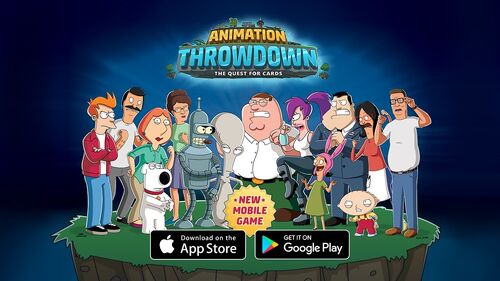 Show creator Matt Weitzman told Variety that the show is under contract for 256 episodes to help TBS launch a new lineup of prime-time animation. This puts the broadcast season count one more than previously announced that should last until 2018.[8]