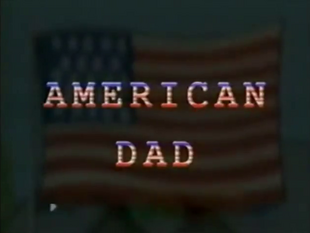 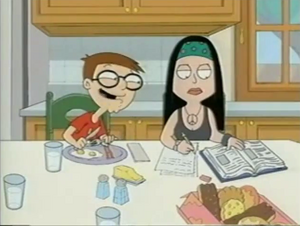 Following a title screen with "You're A Lucky Fellow, Mr. Smith" by Frank Sinatra playing, the pitch opens with Steve humming, which annoys Hayley who is working on her schoolwork for community college. When she snaps at him, they exchange barbs until Francine calms the pair. Klaus uses her assertiveness with the children to flirt with her.

Stan arrives with Roger in tow, refusing to permit him to use the car or even be out of the house due to his being an alien. Roger points out that it was he who saved Stan's life at Area 51. Tired of Roger's whining, Stan inquires if he has managed to contact his home planet but Roger had blown it off. Changing the subject, Roger asks Francine if she had picked up Pecan Sandies as requested and finds out that she had not. She offers to look for them while doing her errands for the day, while Stan warns her of potential danger. Hayley criticizes Stan's attitude and job, which he defends before firing a salvo of bullets into the toaster. 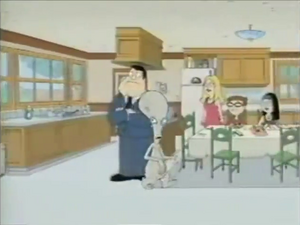 Turning to Steve, Stan asks how he is doing with a lacrosse player he had picked out for him and finds out that Steve has decided to try for a cheerleader instead. As Stan beams at Steve's intentions, Klaus suggests not wearing deodorant to be more attractive by being rugged. Stan reassures him that he should have no trouble attracting his potential date as Smith's are always successful in their romantic quests, before passionately kissing Francine to Klaus' frustration, although he is distracted when Stan feeds him. Hayley questions Steve's odds of success in dating a cheerleader but Roger provides some confidence, just before his chair shatters from his weight. Francine decides to put him on a diet and cuts him off from junk food. When he objects and reaches across the table, it breaks as well, further cementing Francine's resolve.

Later, Hayley enters the Smith home, setting off an alarm and is tackled by Stan. Pulling out a metal detector wand, Stan finds a pack of gum at pitches it away on the possibility that it may be an explosive. Steve walks past him and after Stan asks him how his date request went, nervously claims the cheerleader was sick for the day, but asks if he can have a dog. Stan denies the request, but his appeal to Francine gets a boost when she suggests it could one day lead to his joining the army. After Steve coyly confirms the possibility, Stan is seen returning in his white SUV where he introduces Steve and the family to an elderly dog he had chosen since it had been alive when Ronald Reagan was president.

The pitch ends with the final bars of "You're A Lucky Fellow, Mr. Smith" and the title screen again.

Retrieved from "https://americandad.fandom.com/wiki/American_Dad!_Pilot_Pitch?oldid=89798"
Community content is available under CC-BY-SA unless otherwise noted.