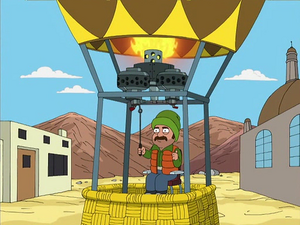 Alejandro Roja is a balloon pilot for Lady Carolyn Gilbert-Lawson, an agent for the Guinness Book of World Records who appears in a middle-Eastern village to award Achmed Asanti in recognition of the world's biggest falafel in "Wife Insurance". When Stan is kicked out of a helicopter by Jim who is intent on marrying Francine, he lands on the falafel, exposing it to be a fake. In an effort to get back to Francine before Jim, Stan threatens Lady Carolyn in order to take her hot-air balloon. When they arrive, Alejandro Roja proposes to Lady Carolyn. Unfortunately, their balloon catches fire shortly after leaving the Smith home and they crash.

Alejandro is voiced by Chris Diamantopoulos.